Thursday, my wife and I travel to Moscow. Her brother Coen will marry Katja, a girl from Lotosjino near (160 km) Moscow. I’d better get acquanted with Russian gestures. It appears that the mano fico has another meaning: an absolute “no” to whatever question or proposal was just made. Although over here it is said to be very rude. Apparently the index-thumb-ring (as in ‘OK’ in some countries) and any shaken fist are vulgar. Winking at a girl is said to mean you think she is a prostitute. Don’t show the soles of your feet. There is some serious writing about Russian gestures, and a Dictionary.

Update: I checked with Katja, and the fico is indeed an absolute ‘no’ and also impolite (it’s mostly a kid thing). The US-style ‘OK’ with ring-shape is fine, though not a strong convention, maybe more like they use it in Italy (described by Kendon). She also mentioned a nice ‘drinking’ gesture. It is a point to, or light tap on a spot to the side of the throat, under the chin. The history of it is that there was once a guy with a stamp at that spot who could drink for free on the czar’s orders. First they gave him a notice to show at bars, but he was such a drunk that he always lost it. Now he only needed to point at the stamp to get a drink.

From Protest to Celebration 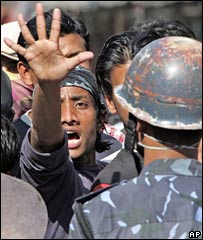 From angry protests to the chants of victory. The people of Nepal raise their hands much the same way as would we (were we to revolt), I believe. In protest, the hands are tense. In celebration they are relaxed, or even waving. In defiance we raise a banner or a fist. In defeat we bow our heads and our hands dangle limply at our side. In glory we salute those who stood by us, and release the tension, by cheering or chanting.

In the news today: an audio message by Bin Laden, the planet’s most unlikely fugitive.

A while ago BBC news analysed (see ‘video’) of Bin Laden’s appearance and gestures in different videotapes. The most recent message dating of October 2004 shows BL in the role of elderly prince, appearing calm and restricting his gestures almost entirely to small ‘point-making’ (typical) and ‘negation-finger-shaking’. Mind you, there are those who think it’s a fake, but I’m inclined to trust the judgement of the BBC and AlJazeera.

Silvio Berlusconi is a man of great gestures, in every sense of the word. He is regularly caught on camera making nice gestures, often the mano cornuta (more on hand charms, or Italian gestures). Berlusconi can’t resist using the mano cornuta, but jokingly, not as an insult. His familiar ways with world leaders, like our very own Jan Peter Balkenende, are charming indeed. 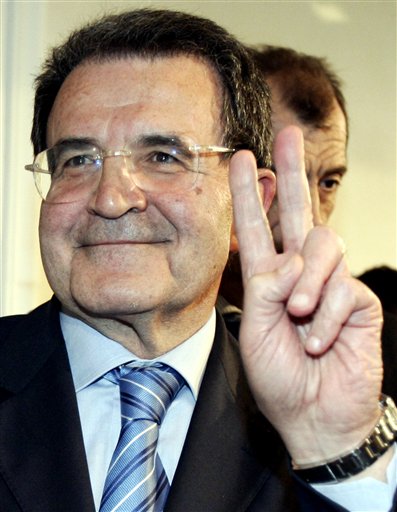 In comparison, Romano Prodi, a great European leader and nicknamed il professore, appears more reserved in his body language. On camera, he appears mostly smiling amicably, sometimes withdrawn and sometimes exuberant. It didn’t stop Prodi from snatching last weeks election victory. Personally, I think Italy can be proud of the grandeur their two rival politicans display. It is something we lack in the Netherlands, despite the occasional gesture by Wouter Bos.

I browsed through half a year of daily Garfield comics (20 April 2006 – 20 Sep 2005) to mark the gestures they feature. It was a fun and interesting exercise. I know of no comic where the gestures are so true to life.

Jan 2005: Bush and family members saluted the marching band of the University of Texas, whose athletes are nicknamed Longhorns with this gesture.

For many people in the world it has a different meaning, though. It is known as the ‘horns gesture’ or the Corna or mano cornuta, see this great wiki entry. Apparently it caused a bit of misunderstanding in Norway (why Norway, though?)

The norwegian confusion is confusing me though. Were there actual Norwegians being offended? Or did the newspaper just make the observation that it could have happened? (see my reward for gesture mix-up evidence)

For the record mr. chairman

Dutch Minister Hoogervorst was caught in the act a while ago. When opposition leader Bos criticized his plans he made a vomiting gesture (dutch: ‘ik kokhals ervan’) which wasn’t taken lightly.

Those who study them like to call them Pen Gestures. The best known example is perhaps the Graffiti on Palm, which a helpful chap managed to implement in a Flash version using his own pattern recognition for Flash. Sharon Oviatt is the great champion of multimodal HCI with pen and speech interfaces. A tell-tale sign of the trouble this technique has to tackle is given in the Palm UI. Graffiti is used to ‘type’, not to ‘command’. For commands, the UI provides tap-buttons.

Pen gesturing may well be a form of semiotically challenged HCI. Graffiti is actually writing in camouflage. Tapping buttons equals mouse clicks equals practical actions. Symbolical pen strokes that convey commands or modulate them come closest to being a ‘movement intended to communicate’. But then to whom? If its to the computer, then what is the message? The message is that a certain command is to be executed. Nothing new. I see no a priori advantage for ‘pen gestures’ over clicking buttons or even a DOS-prompt. All that matters are the same old pro’s and con’s of UI means; of usability in a given task with given users.

With some leniency any and all of the above actions can be seen as a communicative act towards the computer. In this sense Human-Computer Interaction is always a communicative dialogue. But I don’t like it like that. I like to think there is a difference between talking and gesturing to addressees (be they computer or not) and using them as tools. And I’ll make this promise: At the first sign that my computer is actually interest in what I have to say, I will tell it all my dreams and ambitions for his future.

Worries of a Signer

Onno Crasborn wrote a column in Woord en Gebaar called ‘Wil ik met mijn computer praten‘ (more). In our Sign Language Recognition project, we try to keep him posted as something of an external conscience (see lecture in workshop ‘Een Mooi Gebaar’. We always rush to explain that signing computers will not replace classroom assistants. They will only add a ‘computer corner’ to a deaf children’s school class. Or it may provide some interactive ‘playful learning’ at home. Nevertheless, worries remain. And if our conscience worries, how shall we ease it?
Update: Trying to ease conscience 1 – Computers that recognize spoken language have not replaced humans. Dictation software did not replace secretaries, it is only used in 2 cases: if you have RSI, or to replace voice recording (that you would have to type out later). Voice command software software did not replace phone receptionists, they replaced ‘for this, press 1. For that, press 2.’

Frank van Marwijk keeps the world, or at least the Netherlands, posted on body language (dutch: lichaamstaal). First, there is www.lichaamstaal.nl with a lot of info. Second, he keeps lichaamstaal.startpagina.nl with a huge collection of links, also to gesture stuff and funnies like animal body language.

An artisitic impression of a day in the life of Frank van Marwijk? (source)

Finally, he’s blogging about it too. Oh wait, he also wrote a book on babies’ body language.