In the news today: Marine Corps Shelves Futuristic Robo-Mule Due to Noise Concerns.

I always love it when robots and robotic solutions are actually evaluated in a reality check with the people who are supposed to use it in the future in a realistic scenario. Often, these people and these scenario’s have not really been involved in the development process.

In this case it turns out that the Robo-Mule was too loud and suffered from other real-world problems like dependability and subtlety. So, the military has decided to shelve the programme until further notice, meaning that the company developing the robot basically also stops the programme.

For other sectors, like healthcare, these kinds of reality checks are also important. Because, it the military finds the system unsuitable for real-world application then chances are that other sectors will also find fault with it. A similar case was the exo-skeleton. After initial pioneering work by the military it was also thought applicable in healthcare. But, after the military lost interest, the entire solution lost a lot of momentum.

Some images of the Robo-Mule.

Finally, a soldier who doesn’t think

“Should I stay or should I go?” That seems to be the only concern of the robot that features in a demo movie made by researcher at Brown University. It takes its gestured orders in a way that is easily associated with the way soldiers on a patrol would gesture to ‘stop’ or to ‘go’ to the next soldier in the line. Or at least it looks similar to a man of my limited experience. And having DARPA as a main sponsor also helps the association. 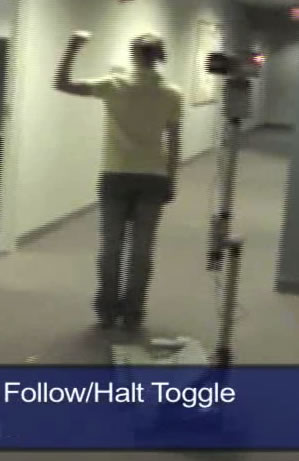 It looks like they have done quite a good job with the robot, given the current state of gesture recognition. I especially like it that people don’t have to wear sensors. This is achieved in part by using a depth camera (the CSEM Swiss Ranger) Besides that, the recognition of individuals does still seem to be a bit shaky, since you appear to have to show you face quite clearly before it sees who you are (but then again, given current face recognition technology that is no surprise either, and they have actually done a nice job of getting it up and running in the first place).

Technovelgy posted a good description (here) of the system and some first impressions and associations (lol @ the HHGTTG quote).

A movie of the robot in action, following people and taking orders by gesture (here).