In never-never-land across the ocean they simply will not put up with it. A mere bus driver giving the president Bush the finger? I think not. The woman must be fired. And so Republican Rep. Dave Reichert called her boss and arranged matters. It is a no-news story that I would not normally dream of bothering you with. Some lady giving some guy the finger, it must happen thousands of times in exactly the same way. But because the lady lost her job and the US media and politicians are whipping up the story in these elections it has become too big to ignore. 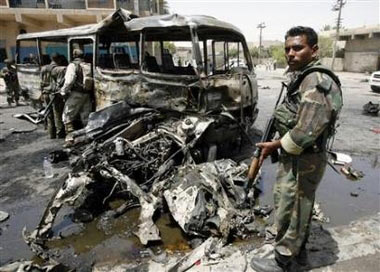 The national guard was called in to secure the bus 🙂 (source)