How serious do we take gestures? Science tells us gestures are intended to communicate and perceived as such (Melinger & Levelt 2004, pdf). Common sense tells us the same. Yet, gesture researchers like Susan Goldin-Meadow feel it necessary to point out that more attention should be paid to them, for example in the court room.

Goldin-Meadow warns (Hearing Gesture, 2003) against the use of gestures to lead a witness. She fears gestures can be used by skilled lawyers as an additional line of communication (to witness or jury) that doesn’t show up in the minutes. Gestures are not transcribed like spoken words. Although she has a point that gestures effect legal interviews, I do think gestures are monitored to prevent an unwanted ‘sub-rosa conversation’. To use her own example, it would surprise me if no protest followed when a lawyer suggests to a child through gesture that a person had a beard (trying to lead the witness). 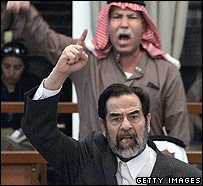 Do words get more attention than gestures?

In the Netherlands, and France as well, legal interviews with children (e.g. as witness) are conducted in closed sessions which are videotaped. In that way, all their communicative behaviour is put on record.

My general impression is that we, the people, pay good attention to gestures, both in the court room and outside it. Perhaps gestures were underrated by certain scholars for a while. As for the importance of gestures in society, or in court, I see no challengers, only some fiery champions.

For some background check this paper Re-membering Law: Legal Gesture in the Past, Present And Future by Law Prof BJ Hibbitts. And here are examples of legal cases involving gestures. Still not tired of reading? Chew on section 3, book XI, of Quintilian: Institutio Oratoria. If you are a lawyer, you may still learn from classic Roman rhetorics how to deliver a speech with appropriate gesturing.

Jailed for a Gesture